Do you have more questions about GLHotel?

Benidorm Old Town is located on Punta de Canfali and is bordered by Elche Park and the Triangular Square. One of the most charming areas of the city, it’s the ideal location for a cultural visit with children. If you’re travelling to this part of the Alicante area of the Costa Blanca any time soon, here are our suggestions for your trip.

From its traditions as a fishing town, Benidorm has for several decades now been a benchmark for international tourism. Since the early 1980s, it has been adapting to the rising demand that resulted from it becoming increasingly well-known and receiving an increasing number of visitors. Paradoxically, it is now known for being one of the three Spanish cities with the most skyscrapers.

But a romantic getaway in Benidorm is possible because, despite everything, the centre still retains its essence. Why not take a walk through its streets and enjoy the magnificent views of any of its five beaches? You can start your tour in Plaza Canalejas, located at the end of Playa de Levante, and walk until you reach points of interest such as the Iglesia de San Jaime y Santa Ana (the oldest church in the city). Take the opportunity to stop at the Plaza de San Jaime, just in front of the church, and enjoy the beautiful views from its viewpoint. 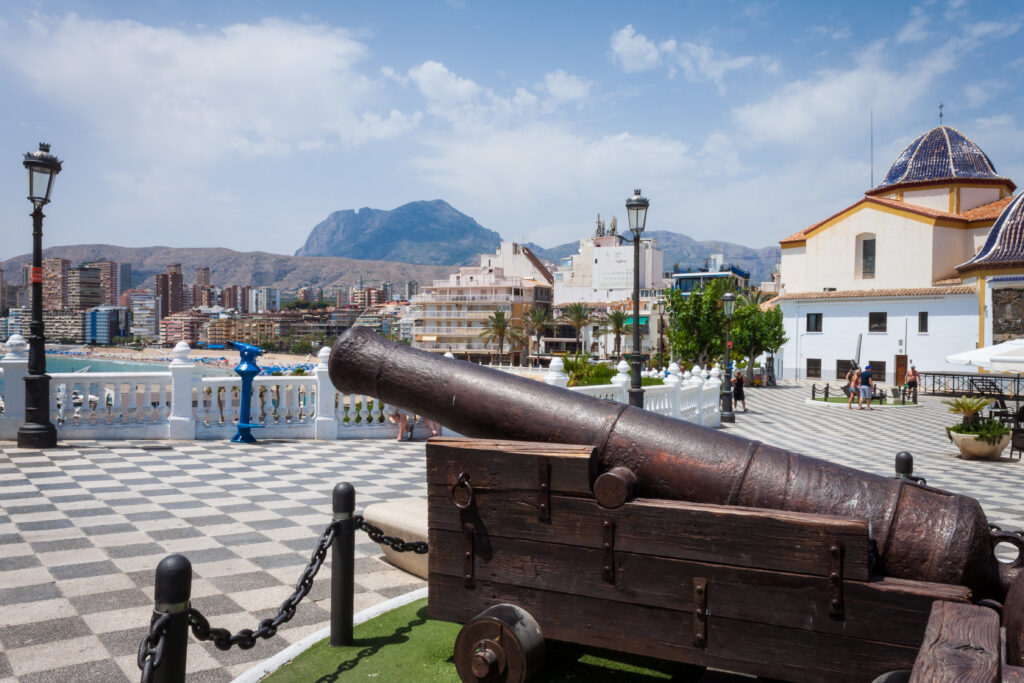 Plaza Castelar will be your next stop, from where you can see the marina, Cala del Mal Pas and Playa de Poniente. This place is known for the anchor donated by the Spanish Navy. From there, you can continue to Plaza Santa Ana, which is flanked by four iron cannons reaching out to the points of the compass.

The Plaza del Castillo and its viewpoint is another important stop on your trip. Plaza de la Señoría, Paseo del Faro, Boca del Calvari Museum… just some of the areas and places of interest that you should consider including on your route.

Do you like outdoor sports activities? This can be a good option if you travel as a family with your children. Reserve a cyclist’s hotel in Benidorm and enjoy the many attractive routes that you will find in the area and its surroundings.

If you prefer playgrounds, you can take the kids to Terra Mitica, Festilandia, Aqualandia, Iberia Park… There are many options in Benidorm, where the choice of leisure activities is immense. Children will have a great time during the holidays, because the beaches are also spectacular.

When you feel like going out for lunch, dinner or a drink, we recommend you to try Zona 9, Callejón de los Gatos (in Benidorm Old Town), Calvari, the Basque area, the English area, Playa de Levante or the Avenida de la Comunidad Valenciana, where you will find the best nightclubs. Whatever you’re looking for, you’ll have a great time in Benidorm. See you there!

In view of the latest global developments, and given the extraordinary measures being taken around the world in relation to COVID-19, the General Manager of Grand Luxor Hotel, it has been deemed to take a position of responsibility and commitment to our customers and employees, temporarily stopping the activity in our hotels.

For all these reasons, the activity is suspended preventively until March 26th, 2021, when we will be back, and we can resume our commitment to tourism quality. This thoughtful and consensual decision has been made from our wishes to minimize the risk of customers and employees, because the safety is one of our highest priority.

Digital Marketing. This project has been developed by Grupo Enfoca: Online Marketing Alicante